During these 100 degree days, for the safety and comfort of visitors, volunteers and staff, Campbell House may be closed or may offer fewer hours than usual.. We are happy to issue a raincheck with your paid admission so you can return another day.

John Mix Stanley was born in Canandaigua, New York in 1814 and died in Detroit, Michigan in 1872. He became an important Indian painter and survey artist.

Orphaned in 1828, Stanley was apprenticed to a coach maker. He moved to Detroit and became a painter of houses and signs in 1834. There, James Bowman, an accomplished portrait painter, admired a Stanley sign and took Stanley as a pupil. Stanley painted portraits around Chicago from 1836 to 1838. In 1842 Stanley established a studio in Fort Gibson, Oklahoma, painting frontiersmen and Indians. By 1846, Stanley’s paintings of Indians were on display in Cincinnati. Stanley joined a wagon train for Santa Fe that year where he became the artist of the Kearny military expedition.  Kearny’s official report contained lithographs of Stanley sketches.

He was painting Indian portraits in Oregon in 1847 and Polynesian portraits in Hawaii in 1848–1849. Stanley displayed his Indian Gallery in Eastern cities in 1850–1851 and, in 1852, placed his collection of 150 paintings on display at the Smithsonian Institution. He offered it to the United States Government for $19,200. Congress refused, and, unfortunately, the collection was destroyed by fire in 1865.

In 1853, Stanley became the official artist for the Isaac I. Stevens expedition for the northern railway survey and a year later he used his field sketches to prepare a huge panorama of 42 episodes of Western scenes. Like most of Stanley’s original work, the panorama has disappeared.

Stanley married in 1854. The remainder of his life was spent as a studio artist and arranging for chromolithography of his paintings.

Sources: Who’s Who in American Art. 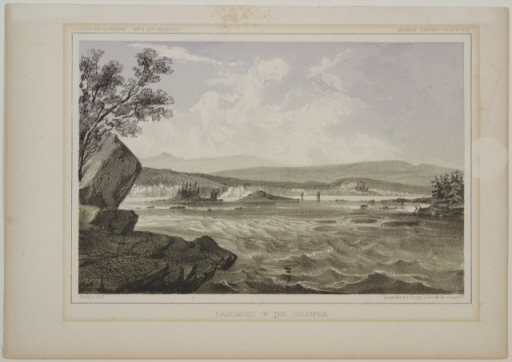 Cascades of the Columbia 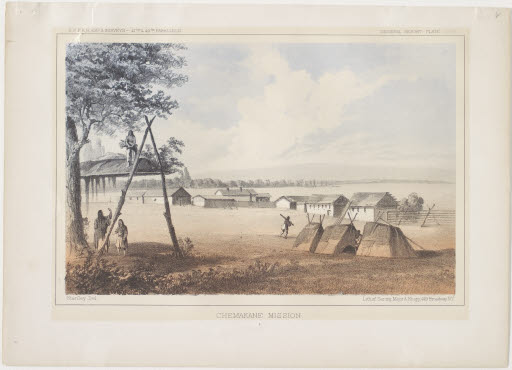 Curator Notes: American explorers Lewis and Clarke first noted Salishan speaking American Indian people, now known as the Spokan, living along the Spokane River in Eastern Washington in 1805. In 1839, Presbyterian missionaries established a mission among the Lower Spokan people at Chemakane, Washington. There they published a Spokan language primer in 1842, one of the earliest books printed on the Pacific coast. John Mix Stanley documented the mission buildings during the Northern Pacific Railway survey expedition of 1853. Missionaries abandoned the mission in 1849 following the massacre of Reverend Marcus Whitman and his companions at the Waiilatpu Presbyterian mission in the Walla Walla valley. 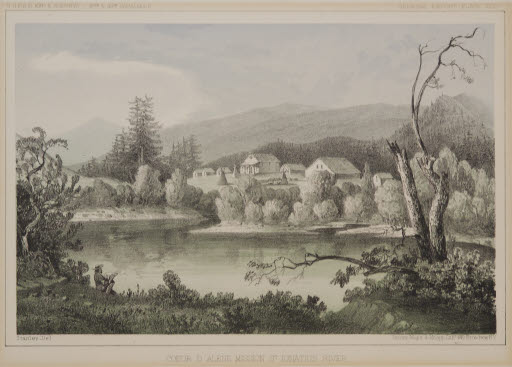 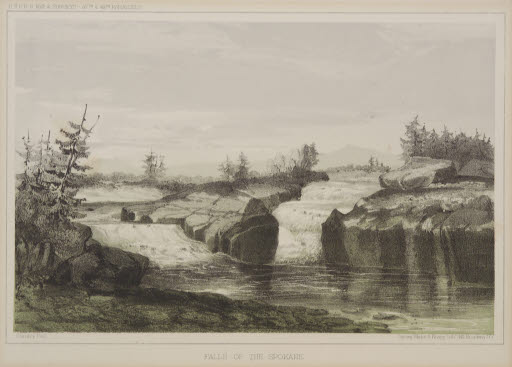 Falls of the Spokane 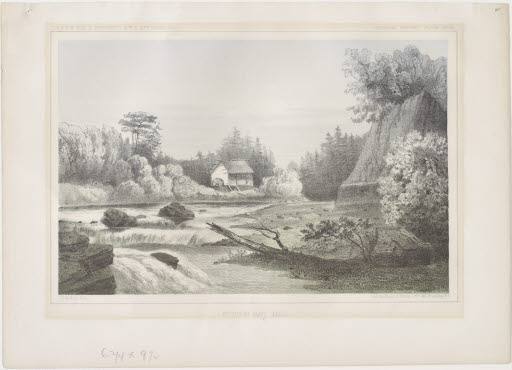 Curator Notes: In 1853, John Mix Stanley, join the Isaac Stevens survey expedition for the Northern Pacific Railway as the expedition’s official artist. He sketched wild life, people and landscape views and participated in the preliminary survey report delivered in Washington DC.Although much of Stanley’s original works are lost his views of the West survive as published images like this lithograph of the Hudson Bay Mill. 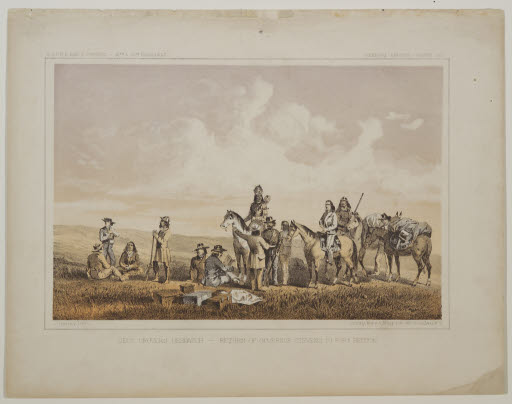