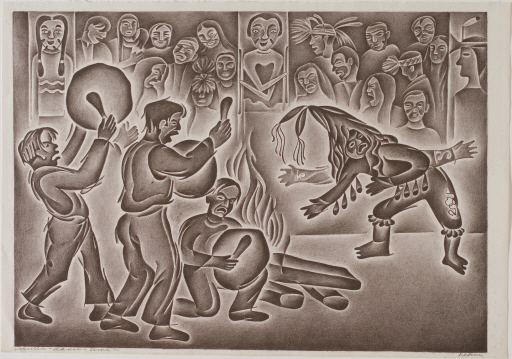 The man danced around the fire and was yelling, "RWAR!" The men next to the dancing man are beating the drum like there is no tomorrow. The dancing man's hair catches on fire and he keeps yelling. Many people look in amazement as they think it is part of the act. Then all of a sudden the dancing man falls and stops dancing and moving period. His drummers look at him like he is tired. But really the man is off to the next world. All of a sudden the man reappears saying why... why you didn't save me. Then all of a sudden lighting came from the sky striking the dancing mans body. He got up and came back to live and didn't say a word to the people or drummers. He just went home and then disappeared again. The people called him Jesus and told many stories to there kid. The end

For the Zubazinonway mezzo American tribe, the annual dance of the hunt was an important day of the year. The Zubazinonwayians celebrate a successful year of triumph and feast with a ritual dance around the fire. The drums beating in all directions set the tempo for the dancer closest to the fire mimicking the animals of the forest. As the drumming gradually became loud and more numerous in number the dancer would pick up his pace to replicate the excitement and adrenaline of the beasts being pursued in the hunt. As the drumming became more intense and the man jumped around more like he was in a savage state of rancor the crowd would continually cheer him on until he could dance no longer. When the man finally lost the strength to dance it would simulate the beast losing the energy to fight back. Another man would then come in and replace the current dancer, which was a metaphor for the hunter finally overcoming the beast and reaping the benefits of the animal.

my friends and i go to morn those who have come before us. as we look upon those whom were painted on the walls we begin to chant, and try to call forth the spirits of those we love. as we open our eyes and beat our drums we see the spirits form. we keep on chanting for we fear what will happen if we stop.

Native American dancing ritual. there are three guys playing drums and the fours guy dancing, for maybe a good corn harvest, because the cosyume he is wearing looks somewhat like corn