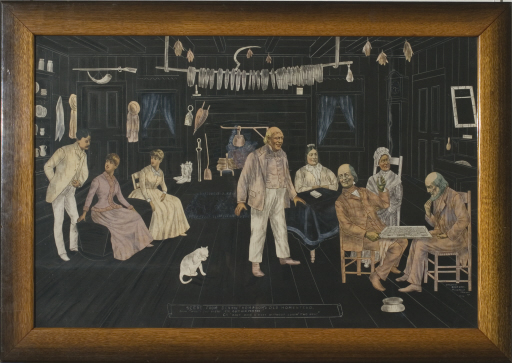 Once upon a time on the docks of Seattle there was an old time pub that seemed to be very popular with the older male community. Here, at the pub, they could talk about all of thier greatest stories. They could sit here for hours and brag about how brave they were in the war, how big the last fish they caught was and how it was easily the biggest fish ever caught out of the area. How they fought it for hours and almost got pulled out of the boat multiple times while trying to subdue the beast. But the most common story ever told was the tale timmy talls. Timmy talls was a small boy who would run around the docks late at night and ask for money. Most of the gentlemen at the bar have had an encounter with timmy talls. He would usually run from the hours of 10 - 1 in the morning and was very demanding. "give me some money you fool!" he would say. you wouldnt dare deny his request two times in a row for he would kick you in the shins and make them hurt. So, most of the men were poor. end.

My Dear where is Charlie, i hope hes not out and about looking for one of those golden tickets! it is too cold out., Grandpa your walking! im sooo happpy and excited. Be careful not to trip on the Cat.

The man in the middle of the picture just said something funny and the only person who actually laughed was on of the checker-playing old men. The man on the right is trying to impress the ladies with his french accent. The cat is just sitting in the middle of it all, minding its own business, licking its paw.

george was a elderly man that enjoyed spending time with people around his age. He liked being around people he own age because they had more to talk about and they could ralate to each other better then someone that was 40 years younger or 10 years older. george didnt really like animals but a while ago he found a cat that wouldnt leave him alone so george decides to keep it and names it Pest, the name fit very well. Georges friends would bring along other people when they came to visit him. George enjoyed the extra company. they would sit around and talk and play board games until it was late and everybody would head home and the next day everything would repeat.

Where everybody knows your name, and they're always glad you came. Everyone's celebrating after the wedding at the pub. Everyone's welcome including the household animals. Boys and girls of all ages. The young and the elderly are all welcome here.

the one in the middle is tellling a joke

Oh my dear, thought Louisa. There he goes again, the cad! Last week he was impressing us with his tall tales of the seven seas, and this week it's his extensive knowledge of Botany. I certainly wish it weren't so cold outside so my pink-dressed sister and I could escape this drawing-room for a pleasant stroll. I will strive to be more like dear white kitty and mind my own paws.