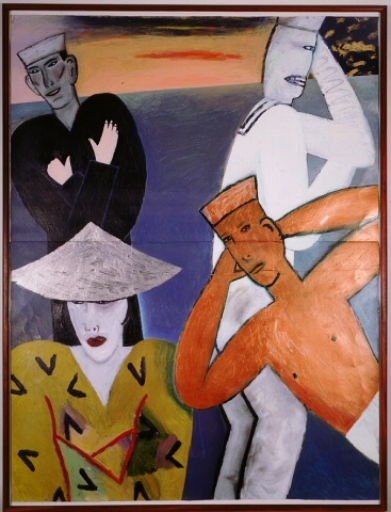 Once upon a time, there was a culture convention for all types of people around the world. The people dipicted in this picture are ones who lost their way to the convention. Sal, the man in blue, Tawni, the chinese woman, Carl, the shinduian and Nespa, the white sailor are all trying to make their way to the convention and somehow all got lost in the same area. A map was printed out and sent to on person from every country and out of all the countries these four people read the map wrong. After all meeting in the same place they asked eachother if they were the only ones. Carl replied "no,thats impossible, there are too many countries for us to be the only ones who came" and the rest agreed. After questioning their situation from a while they decided to walk to the nearest gas station and get new directions! While walking for about 20 minutes they realized that they could see no signs of civilization and proceded to panic. They hadnt realized where they were or who dropped them off.

This story begins when a lovely geisha is traveling to America to escape from the life of performing the arts of dance and music. She has been traveling on a ship for a few months now. The captain of this boat, who wears a white jacket, hates her because she distracts all the attention of the crew when they should be maning the ship. There is a sailor on this boat that is love sick towards her. She avoids him as much as possible. A second sailor, a man that is sunburnt from the sun, tries getting her attention by showing off. She later gets to America. Not just free from the culture of Japan, but also from the crazy men of the ship.

the darker person is a showoff and is flaunting his tan and the white person is shy and dissapointed that he dosn't look as good. the girl in the ppicture is shy to and she is annoyed with the dark guy and she really likes the white guy but can't tell him caus eshe is shy and the white guy really likes her to but he is even shyer and less confident than she is so they will never know that they like one another and the sailor in the backround is not very smart so he buts into everyones conversations

For 16 years I've been curious about what this woman has in common with these sailor-men. Perhaps they are really one man – a man imbedded so deeply in her psyche that she can't escape him. In all of these years I've never seen her smile.

Three very different male reactions to a female passing by!