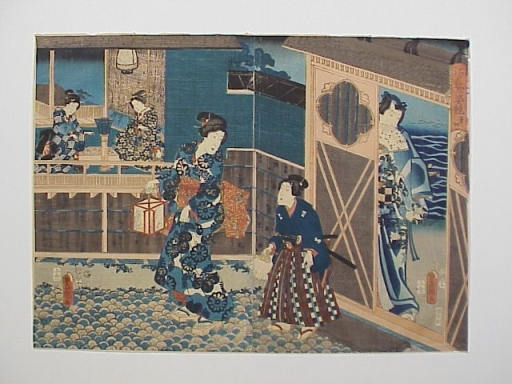 They're talking about shopping at a new store. The person behind the door is listening because that person is a thief.

Once upon a time in ancient, Fudal Japan there was a little boy named howie. Howie was a very quiet little boy and seemed to get along with everyone. He was one of the smartest kids in japan and wanted to show his knowledge to the world by going to a different country and showing them how smart he was. By doing this he would be recognized by the National IQ society as one of the smartest people alive. So, one day howie went to the airport to get a ticket for the earliest ticket to america. As he asked for the ticket the lady looked at him and handed him a one way flight to moses lake. Howie seemed to be very pleased with his ticket of choice and borded the plane to moses lake. One his was across the ocean in the plane to moses lake he was wondering how he was going to show his knowledge to the people of moses lake. He came to the conclusion that he would enroll at the high school there and blow everyone out of the water with his amazing skills of knowledge. He then began to laugh......

Once upon a time in fudal japan, there was a little japanese girl named yamaha. Yamaha was a very unique little girl. She stood out from the other girls that were her age. Yamaha didn't want to do girl things like pick daisys and get perms. Yamaha wanted to do guy things like practice to be a samuri and play in the dirt. One day while she was playing samurias and ninjas her friend came up to her (he was a guy, because she didn't hang out with girls because she didnt't do the same things that they did.) Came up to her and asked if she wanted to become a real samuria because his uncle was a trained proffesional. So after Yamaha agreed to become a samuri her friend, bill, took her to meet his uncle. When they walked into his house he was chopping wood and practicing backspin slashes with his razor sharp sword. This made Yamaha very enthused. Wanting to learn more she asked him to a sword dual and they both squared off. With Yamaaha not as skilled bills uncle choped her head clean off. end

This picture looks like a Geisha training center. The girl in the the front is looking like shes being taught something by the shorter lady. But in the mirror she is reflected more 'beautifully' and more womanly. She is in a new outfit, and in a different setting. In the reflection is looks like the woman is done with training, and is in the real world.

This is a great painting showing many small and intricate details. Although from my perspective it looks like 19th century brothel house. This is thought because it is a somewhat large dwelling filled with many women walking and hiding around. In this picture all these women look like they are at their prime age and they look like they are ripe for the picking. This is just a painting showing Asia's great culture and demoralizing thoughts towards women.