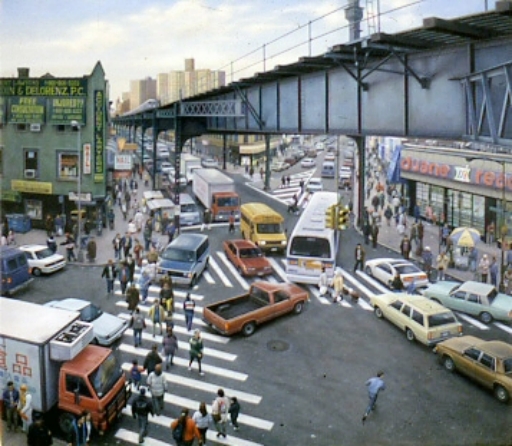 Responses from Other Visitors

This was a town in which many things happend all at once. THis town was a big town. You could wlak down the street and not see anyone familiar for hours. You would feel as if you had just moved into town, except fot the fact that everyone in town was nice to everybody. The traffic would get back up almost everyday around town. But still no one would start honking their horns. They wouldnt begin to cuss and swear at you. They wouldnt send u threats untill you moved. They would just sit in there car as if nothing was happening enjoying the company they had, or the music that was playing on the radio. For this was a nice town. THey would stop to let someone cross wether it be one or two or three hundred people. They did not care, they put other before them selfs. THis was everyones fantasy town where they wanted to live, but no one lived here. For it was only a mir thought in someones mind. No such place has existed to the day, because people put them selfs before others and are slefish.

Once upon a time, a tragic accident took place in the city of Seattle where several people were killed. At a four way intersection several young adlut were having a picnic in the middle of the street. People were in dismay when they saw what was going on and started to protest the picnic. A riot broke out in the middle of town but there was nothing that they could do about the people sitting in the middle of the street. They wouldnt move because they were trying to stop people from using theyre cars to better the environment. Eventually citizens got so angry that they decided it would be a great idea to simply kill them by impact. Several drivers took their cars and surrounded that people having a picnic and hit them viggorously until there was nothing left for them to hit.

As this third world country was so amused with the new devices at their disposal they never relized the difficulties of driving a vechile in such a crouded city. do to the inexperience this mess that only took 3 hours to make will take around a month and a half to to clean up. We are sorry about the inconvience and will have learned for this its not as easy introducing cars to new countries in the future.

This picture reminds me of Seattle. The reasons why is because of all the traffic and also because every year my mom and my dad would take my two brothers and i to Pikes Place Market in Seattle and we would get tons of fish and other nick knacks. But we weren't just there for the fish and nick knacks we were there to see are aunt and she would always want to go there too so she could get food in that house of her because she NEVER EVER had food for us to eat.

It is a beautiful day in Seattle, Washington the trains, cars, and buss are going by on one of the most busy places that there is but Seattle is a vey busy place many people here drive, walk ride the bus and there bikes to work. There is a lot of nice stores to go to people selling food on the street to make a little bit of money a day. There is many different backgrounds here in Seattle from chine's, Japanese, Mexican, American, to Native Americans and even Pilipino. One has to be very careful when being on this streets many things happen like a bus passed on a red light and got in the middle of the street when a red car was going by and a school bus was going by also good thing that the drivers had good reflexes and they pushed on he brakes as fast as they could so that they wouldn't get hit or hit the big whit bus that got in the way. When all of that was done with, some people were trying to get across the street when they were so close to getting hit but the cars stopped.

It is a regular traffic day in the city that never sleeps, New York, NEW YORK. People are walking and some are running to work and some are in cars they are struggling to pass and other people are taking the bus to get to the places that they need to go to others are taking the train. New York is a very busy place all day it is always crowded with people coming and going to work and other stuff if you are not careful you can get hit if you are walking on the road by cars, bus or trucks that are going by. New York is not the most safest place to stay but to the people that live in New York i think that they are already use to all the things that happen here from car racks to robbing this is a very unique place to stay if someone is use to this sort of stuff that happen about almost every day just be careful on the streets if you are walking there is a lot of people that like to take things out of other people's hands like purses, and some times even your children but nice place to live.

It is a regular traffic day in the city of new york. People are walking to work and cars are really busy. Some guy on the bottom in the blue is running across as he is in a hurry to get to a marked. the weather is nice and sunny outside. There is a big bus leaving to the freeway. A small red pickup truck is in the middle of the road as he is trying to get the freeways as well.

It was a busy day in China town. Tons of people out and about, walking and in traffic. People were in the little stores and walking through traffic when there was a big colisioun between a bus and a truck. It had backed up all the traffic and it made it harder for people to get around town. It was a rough day for everybody. Traffc was backed up for miles because the bus was not paying attention and had hit the truck.

One sunny day there was huge traffic jam. Everyone just got off work and many drivers are very heated and excited. So when they got to this intersection people were running red lights and all control was lost. This is why there is such a traffic jam.

Rush hour Traffic in a big city and everybody's trying get home to see there family. and its a late fall evening. in the suburbs of a big U.S. city

it was a beautiful day in the Bronx when chris decided to finally get out of bed and go to work. As a bus driver chris had to make sure everyone got to teir destinations safely and had no complaints about his driving abilities. this certain day he felt a bit awkward after spending the night at the Thirstys, the bar two blocks down from his appartment, he haed already picked up all of klhis passengers when he got to this intersection and all of a sudden went blind, or at least he thought, and crashed with these other vehicles. he had actually fallen asleeo behind the wheel . :)

the result of bad planning of the transportation department, massive gridlock, and a man being hit by a bus, trying to cross the road.

This town is filled with busness men and women, they are hard at work or just getting off work to go home to see thier families. This is a city filled with life, there is no place in this town that no one is doing nothing. There are chilren getting ice cream and busy streets. This town never sleeps

God I hate the city. It's always so crowded. There's always cars running or sirens shrieking. There's no peace and quiet, and silence is golden. In a world of steel, asphalt, concrete, and brick. The people move through it like ants on little tracks of objective.

This picture is just pure, epic chaos at its highest point in time. Pedestrians scatter through the streets, vehicles are wrecking, and no one is paying attention to traffic lights. Injuries and vehicular wrecks are everywhere. I could not imagine living in such a place where there was no regulator that tells you when and when not to go or stop. Complete utterly unstoppable chaos has moved into the city.

A busy day in the city, the crowds grew and grew,until no one can move, the sounds keep getting louder and louder and finally CRASH a bus and a truck collide!!!