Dancing in the Dark: Beijing 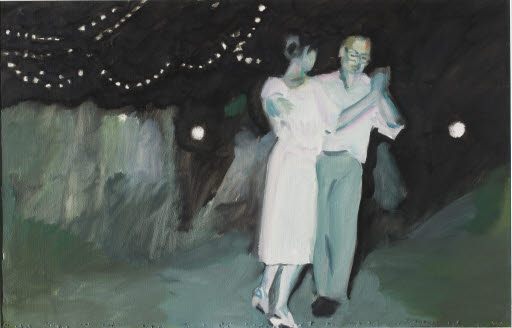 someboby just got a old broken down camera. he wanted to see if it would even work, so he took a picture of two crazy people dancing. he doesnt know how to work the busted thing.he bought it for 1 cent at walmart. he is also a hobo.HEY, DONT SHOVE THAT IN MY EYE!!!!!!!!

In this picture i see two people dancing in the darkness. The mans face shows that he is worried, like the darness symbolizes his life as a struggle. It might also mean that his life has so much worry that he doesn't know when light is to come around. The woman, and the man are not looking at one another at all, like they are together but there is no happiness. This painting means to me that there are hardships in life, like you are left in the darkness, unhappy, even when you are with the one you claim to love, but the light will come around eventually. So in challenging times just have patience cause the day of happiness, and light will come.

They knew this day was coming; they had tried to forget but were unsuccessful. Today is the day that Tom had to be deported for the army. Two years he would be gone, away from his loving wife, Mary. She couldnt hardly bear the thought of not being with Tom for so long. The night before the planned a special going away party for Tom and invited everyone they knew. Eveyone wished him luck on his journey and gave him their addresses so he could write to them. The party ended around 12:30 AM and then Tom and Mary were alone. Tom took Mary outside for one last dance in the moonlight, one last special memory together.

I notice that she is in heels, and he is not looking at her--although maybe he is about to spin her? I see twinkling lights hanging, like for a party. And tents behind them, with people inside. I wonder where the light that is lighting them is coming from-- maybe car lights that are facing them? Or the flash from a camera's flashbulb? I think they might be at a wedding, because they are wearing summery but dressy clothes; they would be guests, though, because they are wearing their own clothes. I wonder what the two brightest lights are--if they are lanterns in the distance. It looks like they might be on a path because the area upon which they're standing is pale. I also feel like I like this image less the longer I look at it--at first, it looked festive, but now the gray-greenishness of the colors make it look under-watery, unhealthy, not good.

it had been fifteen years since jack and jill had last seen each other. in highscool they were the perfect couple, something about their love just made everyone one jealous. then right after graduation, when the accident happened, jill just couldnt do it anymore. she became excluded from everyone, even the love of her life. she never knew what it would feel like to lose jack untill it was to late. when she got the invetation in the mail she didnt even want to go to her sisters wedding. she was in no way shape or form ready to see her sis get married to the love of her life when jill knew she would never get hers back. after alot of fus and fighting from her sister jill got ready and went. the setting was beautiful. as jill looked around from one thing to the next her eyes came to a dead stop when she seen him. the fifteen years came to an end right then...they danced the night away as if no one were there, and they had never been apart.

The night they met was the most magical night of her life. As she entered the park she couldn't help but smile. The music, the lights, and the full moon were all so exciting. Her and her friends were going to have a great night at the dance, it was her first night out since her father had died last month. Her spirits were down and the girls knew they needed to pick them back up. From across the dance gloor, next to the tall oak tree she could see a really good looking guy staring right at her. She blushed and walked away to go get something to drink. A few minutes later she felt a tap on her shoulder and the soft words asking "would you like to dance?" The rest of the night flew by and they danced and laughed and had a wonderful time. For many years later she would look at this picture and remember how she met the love of her life.

As we stood there dancing… enclosed in each others arms. I felt the warmth of his spirit as he looked into my eyes. This is just how it happened...30 years ago. As he said he words i had always hoped he'd say, "I do" sprang from his mouth and I knew forever I'd be his. We had the rough times, the good, the bad, the ugly yet none of that ever seemed to matter, or affect the way we felt for each other. Gazing around the room I see the family we started and the love i had for them.

Jade and Peter are dancing their last dance. Peter is being put up as an offering by the crazy apes that took over Atlanta. The apes think taht Peter is so valuable because he was seen eating grapes and you are supposed to burn and die if you do this impossible act. & Jade is going to kill herself because she will be so depressed. Peter gets killed right there in jade's arms so she runs off the nearest cliff. & they live happily ever after in heaven.

These two here grew up together and always played on the beach and were the strongest of friends. One day the boy told the girl that he would marry her. One tragic night the girl was kidnapped and the boy was very sad and depressed. He searched for her everywhere for 5 years and finally found her. He was so happy and relieved and when her family threw a party for her, he took her hand and danced the day away.

This picture reminds me of the movie the notebook. When two people were crazy in love, and they were dancing in the dark because they just wanted to be together. It shows the true meaning of love, and happiness.

Once upon a time there was a princess named sofia. She was very beautiful and very single. She wanted to find a prince that truely loved and cared about her. One day as she was walking through her villige she meet a fellow named gorje. He wasnt exactly royality but when we talked there was something amazing about him. As a reslut he hasked me to this moonlight dinner and dancing. It sounded so romantic but my parents would never approve, but i couldnt pass up the opportunity so i agreed. He picked me up around the corner from my home at about eight and we went to dinner. Sinner was delicious and then came the dancing. We danced all night in the drakness with the light of the moon and sealed it with a kiss. After that night we started spending all of our time together and i finally got the courage to introduce him to my parents. Suprisingly they loved him and in the next year we got married and lived happyly ever after.

After all the waiting, it wasn't "So Long" after all.

20 years ago, when Wi Lhong said farewell to his sweetheart, he thought it would be forever.

Although hard times came between them, they never gave up on what was unobtainable. What was to come for them was inevitable.

Wi held Connie tightly in his arms. The music swelled. The knew that eventually it would work out; giving up was not in their nature.

They were finally together again. Mr. Long and Miss Lingus would never allow themselves to be apart again. This was the first of many dances, there would be no more periods of separation.

When I first looked at this image, from a distance, I thought it was a photograph. Something about the light, the motion, and composition reminds me of photography. But as I get closer I can see that it's very much a painting, with all those wonderful painterly strokes that look and feel so light on the surface. For all the darkness within the image, the emotional quality doesn't feel dark. Rather, it's inviting - I want to be there in that place dancing. And even though it appears that they are alone, dancing, the mood doesn't feel lonely. It feels romantic and warm with a sense of ease and pleasure. For me, this comes from the slight angle of the dancers, the soft swoop of the lights in the distance and small things like how the gentelman's shirt is slightly untucked and the woman has sandles and you can see how light on her feet she is becuase of this small dark space between the sole of her right foot and shoe. I'm also aware that my presence feels impervious to their moment.